In November, Central Tremont invited other block clubs to engage in a “friendly competition” to see which group could bring in the most donations in the annual Tremont, Duck Island and Irishtown Bend Holiday Food Drive – of nonperishable food items, paper products and cash/check donations. The ultimate goal is to help food pantries, like St. Augustine, Pilgrim Congregational, St. John Cantius, St. Michael the Archangel, Immanuel Lutheran, Westside Catholic Center, St. Malachi and Greater Cleveland Food Bank to feed our Duck Island, Irishtown Bend and Tremont families and children in need in the holiday season.

Eight block clubs took them up on the challenge for 2018/2019: Auburn-Lincoln Park, Duck Island, Holmden-Buhrer-Rowley & Mentor-Castle-Clark, Irishtown Bend, Metro North, North of Literary, and South of Jefferson. Joined by the Tremont West staff – our teams collected lots of canned goods, paper products and check/cash donations – the equivalent of 36,940 items (or $15,142 in cash/checks and 6,614 food items)! For the purposes of this year’s competition, which brought in way more check donations than ever before, each dollar donated by check/cash was considered equivalent to two items (for example a $50 check donation was considered to be 100 items of canned goods). This increase from four years ago (where $1 = 1 item) is based on feedback that the food pantries can often purchase items at a better rate than is available to the public through retail groceries. Nonetheless, even with this change which helped the numbers – still way more checks/cash were donated this year!

Donations have been taken to the food pantries in mid-December before Christmas. Late December/ January donations were delivered in mid-January to help re-stock for the new year ahead.

So now – drumroll please – we are announcing the “reigning champs” block club – based on the number of total food items and checks /cash donated through January 15th. This block club will have “bragging rights” in the competition for the coming year – until next year’s Holiday Food Drive! Well, here are the final standings for the block club donations in the friendly competition of the Holiday Food Drive 2018/2019: 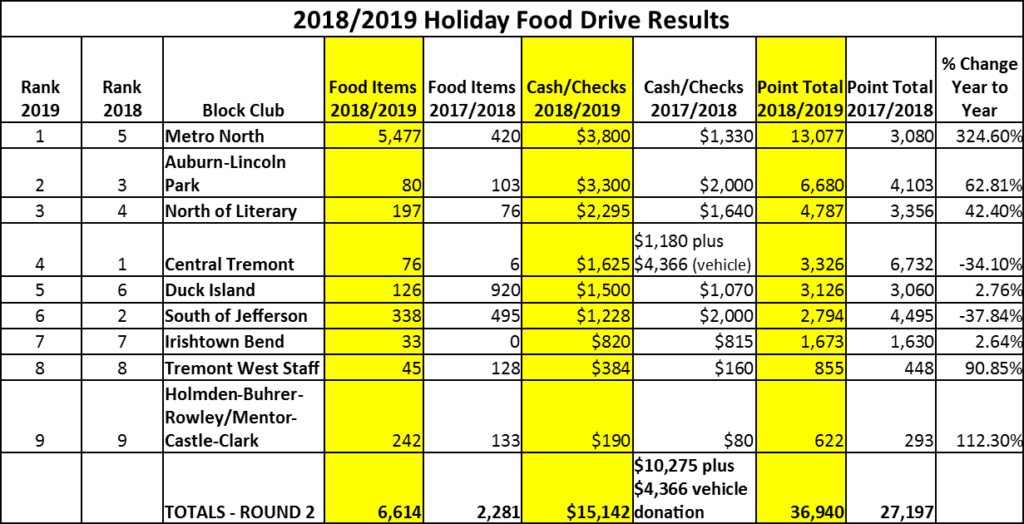 The chart above compares this year to last year.  These are the final totals and reflect food items and cash/check donations contributed through the Food Drive deadline of January 15, 2019.

Awesome job, Metro North Block Club!! This is only Metro North’s second year in the food drive competition!
All the block clubs can be proud of their efforts and the generosity of their memberships.
Top three food donations by block clubs:

Everyone’s numbers were great – but a shout out to Metro North (in their second year with the Food Drive they collected donations of $3,800 in cash/checks and 5,477 food items – a 324.6% increase over 2018) and to Auburn-Lincoln Park ($3,300 in Cash/Checks and 4,103 Points â a  62.81% increase). Also Notable:  Holmden-Buhrer-Rowley/Mentor-Castle-Clark (112.3% increase over 2018), Duck Island (second smallest block club – moving from 6th place to 5th place with 3,126 Points), Irishtown Bend (the smallest block club in geographic size and number of residents) in its third year coming in with 1,673 items/points (a great outpouring from their membership), and Tremont West staff (with a 90.85% increase). Congratulations! Great job done by all the block club memberships and staff!

Many thanks to the Block Club Food Drive Coordinators for all their time, efforts, marketing, and encouragement of their memberships:

And many thanks to all of you for your incredible kindness and generosity to the food pantries and to our Duck Island, Irishtown Bend and Tremont neighbors and families in need! We look forward to your continued support and generosity in 2019!